It is 1915 and the world is at war. In London, an upper class young Women’s Police volunteer flouts convention and befriends the East Enders whose morals she is supposed to regulate. Horrified by the abject poverty and dual standards of the law, she investigates crimes ignored by the police.
A young, jaded and streetwise PC becomes her reluctant ally, his conscience pricked as her dedication challenges his apathy. Forced off the fence when she blunders into trouble, he remembers the reasons he joined the police force.
But as a vortex of treaties suck the world into the War to End All Wars, sinister, hidden agendas pervert the course of justice and rogue investigations have far reaching implications in direct conflict with national security - and with the Allies losing the war, the stakes could not be higher.
6 x 60 crime drama series
*Series Treatment and Pilot Script available on request

Starting in the early years of WWI, each episode leverages historical research and extrapolates a crime; the eponymous pilot speculates that in response to the German use of chemical weapons, the Allies created gas chambers for weapons testing before responding in kind in the Battle of Loos several months later in an operation code-named Red Star...
(see below for episode outlines)
Episode 1 (pilot): Operation Red Star
Episode 2: For Suffrage
Episode 3: The Troubles
Episode 4: Death in China Town
Episode 5: Sabotage
Episode 6: Spanish Flu

FACT: Thousands died in the trenches as Germany deployed chemical warfare for the first time on the battlefield.  Allied troops were completely unprepared and quickly gave the go-ahead to develop their own gas weapons.
At the Battle of Loos on 25th September, 1915, in an operation codenamed Red Star, the British launched their own gas attack using Chlorine. 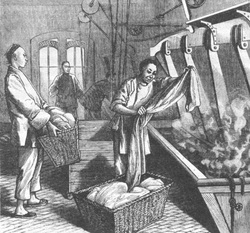 Fact: After the Fu Manchu novels, tours were setup of China Town for the wealthy to observe ‘the heathens’ taking over London. Fear of their mystical practices ‘titillated’ society and their tiny numbers were vastly exaggerated.

The badly beaten body of Fiona Knowles, previously thought to be a victim of chemical weapons testing, is discovered in China Town. As more mutilated young women turn up, the police take a surprising interest and the press exploit the prevalent xenophobia, with hatred campaigns against the Chinese. Docklands, a steady income for manual labourers, is further aggravated by stories of a migrant workforce undercutting the hard-working Brits.

Cici has no tolerance for racism, and reveals her mother was German. As she watches anti-Chinese and Irish tensions simmer, she is once again compelled to act. Her investigation leads her to an opium den with a reputation for depravity: also a front for a high class brothel that services the rich, holding women as prisoners for the pleasure of (and abuse by) debauched moneyed.
Once again alienating the high powered, Forster and Cici get the brothel shut down – and Cici ​discovers the unrest in Docklands was planned. Fears of her Father’s involvement grow as they realise someone wealthy and powerful is intent on destabilising Britain. A highly placed German spy and saboteur is at work. 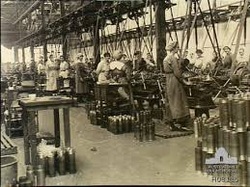 Fact: The atrocious accident rates in munitions factories raised concerns of saboteurs, which led to the placement of WPS undercover.
Additionally, Operation Red Star went ‘live’ in September, 1915, but the deployment was a shambles. Weapons were shipped with the wrong turning key, preventing the gas from being released, resulting in Trojan horses, which were struck by German shells.

Cici ​agrees to go undercover at the Woolwich Arsenal, when authorities become alarmed at the high accident rate and suspect sabotage. On her very first day, Amelia is nearly killed in an ‘accident’, and is instantly suspicious her cover is blown. Rather than back off, she becomes obsessed with exposing the culprits. 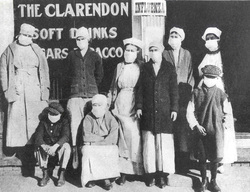 Fact: Spanish Flu killed between 20 to 40 million people, or 3 to 5% of the world’s population, exacerbated by WWI.

As the Flu pandemic hits London, Amelia prepares to confront her Father. In a role reversal, Forster pulls Cici into investigating apparent Flu deaths in tenements, out of growing concern for her mental health.

He also encourages her to look for alternatives to her Father, and be absolutely sure of her evidence.

They discover a murderer and corrupt officials, clearing blocks for development of a power station. In a tense finale, they also realise the German spy is Mr Gower’s secretary, who has been placing a breadcrumb trail to Cici’s Father – and who is preparing to expose him. In a race against the clock, they rush to expose him before he can disable them - or complete his incrimination of Cici’s father.